Dribbler in the lane and kick 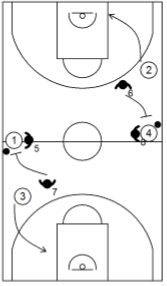 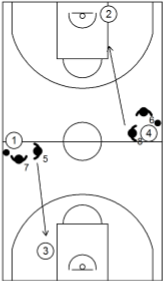 Set up kick directly over the center line.

the trapper moves aggressively towards the half way line just before the dribbler crosses it (but due to his speed and the position of his defender is not able to change direction) Â- the trapper widens himself, but moves the foot closest to the touchline backwards slightly, so that he can close the touchline with 1 or 2 slides Â- the dribbler must never pass between the two defenders

As soon as the dribbler grabs the ball, the trapper stays with it Â- the other defender sprints towards the free attacker

defender forces the dribbler to the side, but must keep an appropriate distance, taking into account the dexterity and speed of the dribbler Â- defender must force the dribbler to move at high speed along the touchline to the attacking half

The players dribble one by one in a zigzag fashion along the length of the playing field. When a player changes direction he/she bounces the ball under the legs and also changes hands.

The players practice the crossover technique. They start dribbling with their strong hand. Then the ball is bounced in a V-shape to the other hand. Make this exercise more difficult by running with the ball or a track.

The players try to dribble the ball behind their back. This works the same way as the crossover technique except the ball is not passed in front of the body but behind the back.

Player 1 dribbles across the width of the field, player 2 tries to tap the ball away. When this succeeds, the roles are reversed. Players are allowed to use several dribbling techniques.

The players stand around the bucket or on the free throw line and try to score in the basket. Vary their position and distance.

Players dribble from the center line to the free throw line and try to score from there within 5 seconds.

Lay-up exercise across the width of...

Insight and control over your dribble

Half of the basketball players have a ball.

These basketball players dribble all over the room.

On the whistle they pass the ball to someone they first made eye contact with.

The pass they use to do so is up to them.

Choose the pass that is best in the situation.

If you are close to the ball, do not pass. 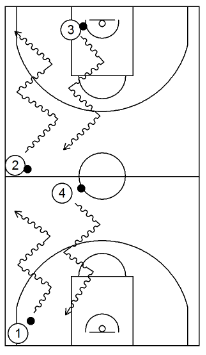 Requirements:
Players must be able to dribble away from the ball at an angle with one hand at the side

Objective:
practise speed and direction change with the ball behind the body and a 180 degree turn of the body Objective:
practice retreat dribble to get out of a kick 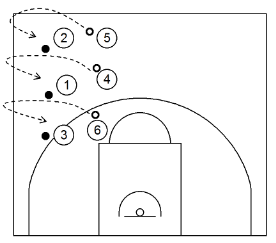 Prerequisites:
Players should have a reasonable grasp of the basic technique of dribbling.

dribble with strength from the wrist 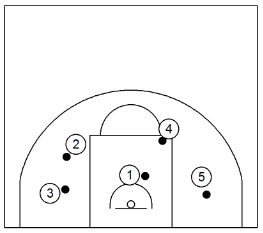 Prerequisites:
Players should have a reasonable grasp of the basic technique of dribbling.

Objective:
To have players dribble by feel while having their attention focused on something else

Variations:
dribble with the weak hand only