In short: running exercise with sprinting and turning in which the players have to go to the bottom.

Organisation: Five lines are laid out with a distance of about 5 metres between them. In the hall will be told which lines on the floor are involved.

Then to the third line (at 15 metres) and back again and then once more to the last line. If necessary touch the ground at every line.

You have to go 'to the bottom' (you will succeed). This exercise can be repeated several times, but then there must be a clear rest in between. In this rest period one can take e.g. one free ball from each section. Then line up behind the line again and sprint etc. until everyone in the section has taken one free ball.

Variations:
The same exercise but now with three teams in relay. Which group finishes first?

Picking up cubes. Like a., but now cubes are placed at the place of the lines, which the children have to collect one by one. Who finishes first?

The 'course' is the same, but now the children alternate between walking forward and backward, or they walk with cross passes, with running jumps,

In short: exercise to determine 'the condition'. Organisation: Set out a course of a known length, for example 400 metres with a pylon every 50 metres.

In a period of 12 minutes the players have to try to cover the greatest possible
distance on foot. The distance covered is a measure
for 'the condition', better said: the endurance
for running. Kenneth Cooper used
the following table (for players over 30 years of age
shorter distances):

The Cooper test is very controversial. On the one hand because many korfball players
hate it (fear of getting tired?), on the other hand because the
test is not a good indicator of korfball fitness.
The power of jumping, the ability to recover after a long attack, the purity ofthe

shot from a long distance at the end of a game
are all things that are of great importance in a game and
are not measured by the test.

However,as an indication of someone's basic fitness at the beginning of the season,
the Coopertest can be used. However, the numbers
from the table aboveshould

beused with some flexibility
. Personally I think 2700 meters for ladies
is quite a long way, but 2800 meters for men is not very far at all
.

Inbrief: practising various running and jumping forms in a circle formation. Organisation: All the players hold each other by the hands and form a large circle. Then they let go of each other and take a number of steps backwards. The players are numbered in order: 1, 2, 1, 2, etc.

Same as in a., but now limping on the right leg. After one round change and go round on the left leg. Then the numbers 2 follow. Repeat one more time.

Same as c., but the billy goats stand a bit higher. The pace needs to slow down a bit now, the important thing is to make a high jump with a powerful push off.

Exercise a. again, but now walk the other way.

The numbers 2 stand in a lying position, the numbers 1 jump over them with a long and high jump (a kind of running jump); the push-off takes place with one leg. After three rounds change. Then the same exercise again, but now take off with the other leg.

The numbers 2 lie down on their stomachs (or possibly squat). The number 1 jumps over them, while they take off with 2 legs. Between the numbers 2 they also jump (hopping). After two rounds change.

Walking and Jumping Around

Organisation:lay out a 'course'onthe field (with pawns or baskets in a large circle). In the hall we just walk around. A whistle is very handy, especially on the field.

Walk around in a quiet pace, spreading the group out over the entire course. The space thus created must be maintained as much as possible during the entire exercise. At the sign of the trainer turn quickly and walk in the other direction.

The same, but now turn the other way. The first steps after the turn are done with a small sprint (short steps).

Walk backwards. At the sign of the trainer turn around again and walk backwards in the other direction. Alternately turn both ways.

Walk around with cross passes. Also the other way around.

Run around. At sign of the coach quickly sit (or lie down), stand up again, make a short sprint and continue running.

Run around. When the whistle blows, try to touch the person in front of you. After a maximum of 20 metres, continue sprinting at the same pace.

The players walk closer to each other, the distance between them is about 1,5 meter. At the sign of the trainer the last one in the row sprints to the front, zigzagging around the others. The trainer whistles every 2 or 3 seconds. Can you catch up with the person in front of you?

At the sign of the trainer the players make a high jump. Left and right turn in turn.

As i., but now the arms must also be raised when jumping up, like when catching a ball under the basket. Make sure you keep jumping high!

The players go round on their right leg, limping. After about half a minute, limping on the left leg.

Like k., but now the jumps must be made as big as possible. Try to get around in as little jumps as possible!

The players may alternate between limping on the left and on the right leg a few times. The players are numbered, alternately 1 and 2. The numbers 1 stand up. The numbers 2 jump over the numbers 1 until they are back on their own place. Then the other way around.

At the sign of the trainer, the players bend their knees and jump up high (push off with two legs, swinging their arms up as support).

Organisation: The players all line up on one side of the pitch.

Before starting these exercises, first perform a good warming-up (see above) with stretching exercises. The sequence was demonstrated by Margriet Poiesz (who is both an athletics and korfball coach) during one of the in-service training sessions of the North district of the NKTV

Steigerungen: running to the other side, whereby the pace is gradually increased to near-sprint speed

Skipping: a form of knee lifting at a very high tempo. The torso is in running position and is certainly not hanging back. The feet are reaching for the ground. This exercise focuses on the front swing phase.

Heels / buttocks or heel strike in high tempo (exercise for the back swing phase). The knees hang down, the trunk is in the walking position

Walk to the other side with long jumps (exercise for the back swing phase). Pay attention to a powerful, long push off. In this exercise, the feet also touch the ground, as it were.

simple running exercises for warming up, in which concentration and reaction also play an important role. Organisation: Pairs in an empty, marked out space.

Walk behind each other in a steady pace, criss-crossing the whole room. Number 2 follows every movement of number 1 as fast as possible, keeping about 1 metre distance. After a while change.

As a., but now the front runner tries to lose the back runner by sudden feints and/or tempo changes.

As a., but now other movements are also allowed: cross passes, jumping, lying down quickly and getting up again, etc.

In short:
start and sprint game.

Organisation:
Pairs on either side of a line in the middle of the hall. The numbers 1, standing slightly left of the line, are the rats and the numbers 2, standing half a metre right of the line, are the ravens. Between the rats and the ravens there is a space of 1 meter. The trainer now calls continuously 'rats' or 'ravens' in random order. When 'rats' is called, the rats run as fast as possible to their side of the room. The ravens must then try to tap the rats.

* Who has their personal opponent tapped the most times?

To keep it exciting, roll the 'r' for a good long time or make it a short story. 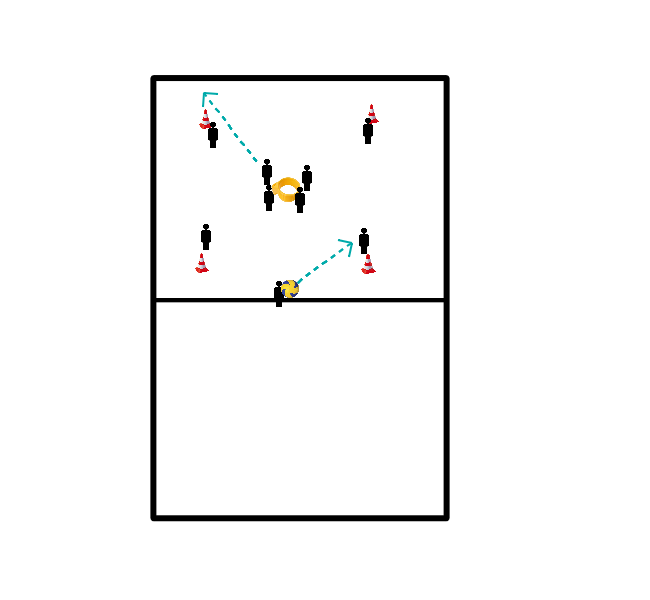