Goal is to play the ball into the hands of another player.

Make two pairs. Each pair stands 7 metres apart and passes the ball with one hand. As soon as one pair succeeds, both players can take 1 step backwards.

This is louging in a korfball way. One person is the attacker, she/he starts with one defender. Within a playing area she/he must try to get free. In front of the box is the attacker. She/he has to make sure the ball gets to the attacker in the box. The other players stand aside. If the attacker receives the ball without the defender intercepting, a defender comes on board.

The organisation in the following exercises is that two players face each other. One ball per pair. The distance can be varied, but players should not practice at maximum distance. Do not let the players stand too 'stiff', they must be able to move freely and relaxed.

Players throw the ball to each other with two hands and catch with two hands. Position at chest height. Pay attention to either throwing or catching, not both at the same time.

Variations: which pair can throw back and forth 25 times the fastest, who can pass the ball over the most without dropping it.

As exercise 1, but pass the ball a little higher, not so high that you have to jump, so just above your head. Pay special attention to the catch and the position of the thumbs, a little closer together than in exercise 1.

Like exercise 1, but the ball is played at knee height. Pay special attention to the pins, slightly closer together and pointing to the ground.

Have the players stand a little closer to each other and bounce the ball over.

Players alternately throw the ball high, low, with a bounce or at chest height.

The same exercises can be performed at a greater distance. A nice variation is to have the players start close to each other and after 3 good tosses take a small step further apart. After a while the players

Each team has its own section.
The other team tries to conquer the box of the other.
This happens when one attacker stands in the box of the other and gets the ball from a teammate.
They get 1 point. No other players are allowed to stand in the box.
When the defence intercepts the ball, they may immediately open the attack on the compartment of the opposite team.

- from both teams 1 player allowed in the box

- no limit on number of defenders in section

- no limit on number of attackers in section

We are going to explain again what exactly the rules and progression of 8x8 is!
- 2x 12,5 minutes and then switch from offense to defense or from defense to offense.
- Stay in your section and do not run to the attack or defence.

Make two sections and let the leader Kyra do her job. Just like a match. And then explain some extra things about being a captain.
- Go to the referee after the match to thank him for blowing the whistle.
- After the whistle, walk to the halfway line and shake hands with the other captain, the coach of the other team and the referee and wish them a good game.
- Choose the side to attack.
- How to warm up and shoot.
- Steering the team to set everything up.

And finally we will play a game!

Chasing your own ball

Two cones and a pole in a triangle. 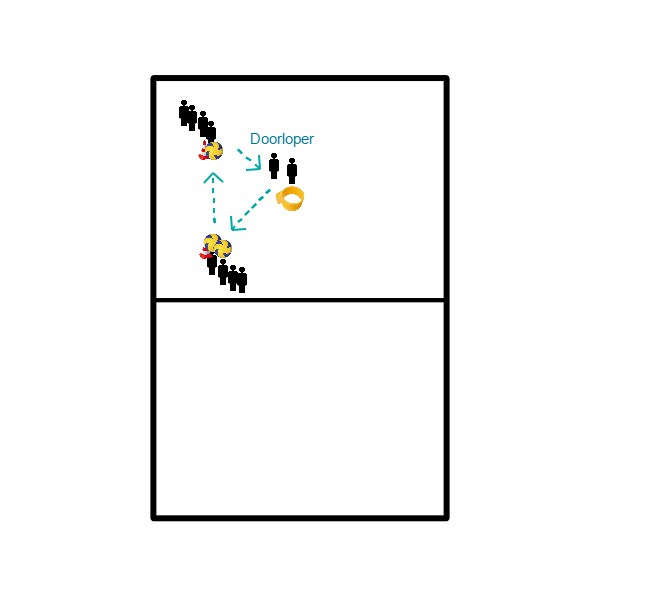