Korfball drills for running in shot

In short: basic exercise for learning or improving the through ball.

a ) The players line up on one side of the hall. No materials are used. Everyone runs to the other side and jumps up when the coach tells them to.

b ) Same, but now everybody has to check for themselves which leg they are using for the push-off.

c ) Everyone walks to the other side at a steady pace and at the signal of the trainer makes a lunge on the leg other than the preferred leg and then one more step to come to a standstill. The preferred leg is now in front.

d ) As c., but now after the hop and the pass a small jump is made from the preferred leg, while simultaneously raising both hands (as with the through ball). Wait a moment after landing and then continue walking calmly. Now there is a hop, skip and jump rhythm. When this rhythm is well mastered, we take the ball:

e ) Like d. but now with ball. Everybody walks to the other side, throws the ball about 2 meters up and let it bounce on the ground in front of them. As soon as the ball bounces, the hurdle is performed on the 'wrong' leg. The ball is caught during the hop. Then the pass and a small jump follow, bringing the ball up with the hands.

f ) Now to the baskets. The declarer stands about 3-4 metres in front of the basket. The ball lies on his sideways extended arm at a height of approx. 80 cm. The passer comes slowly from about 8 meter in front of the basket. When he has reached the height of the attacker, he jumps on the 'wrong' leg, just like in e. During the hop, he takes the ball from the outstretched arm. He makes another pass, after which he brings the ball up, while his preferred leg is in front. As soon as this happens without any major hiccups, switch to g.

(g ) As f., but now the server stands under the basket and throws the ball. This exercise is considerably more difficult than the previous one. On the one hand because the receiver does not know when the ball is thrown. But also because the declarer will often not place the ball correctly. As an intermediate step, you can make sure that only the better players pass (or you do it yourself).

This exercise is pretty much the basis for all shooting styles. The emphasis can be put on many things: learning technique, improving technique, practicing speed, improving shot accuracy (by deliberately making corrections when shot attempts fail), etc. For many people, it works very well if you give them assignments like: 'at which basket do we score the first ... goals first? Because of its simplicity, the exercise is also suitable to start a training session or to be included in a training session that focuses on maintaining or improving fitness (in the latter case, preferably work with pawns).

The movements of the parts j. to

The movements for the items j. - m ) can be learned quite quickly, the exact timing however is much more difficult. In order to learn this, it is necessary in my opinion to perform the exercises frequently with defenders present. See the exercise FOURTEEN, WITH A FIXED DEPENDENT below. In k. and l. there are various ways of making feints

Children will be divided among the poles, up to three children per pole.

Pole:
Two children stay by the pole. You have a declarator and a shooter, the shooter stands near the pawn at about 3 metres distance.
The shooter has to score 4 times and then there is a rotation.

Pawns:
There are two pawns facing each other at a distance of 10 meters. The other children stand near the pawn and run back and forth. When 4 times are scored by the shooter, there is a rotation. 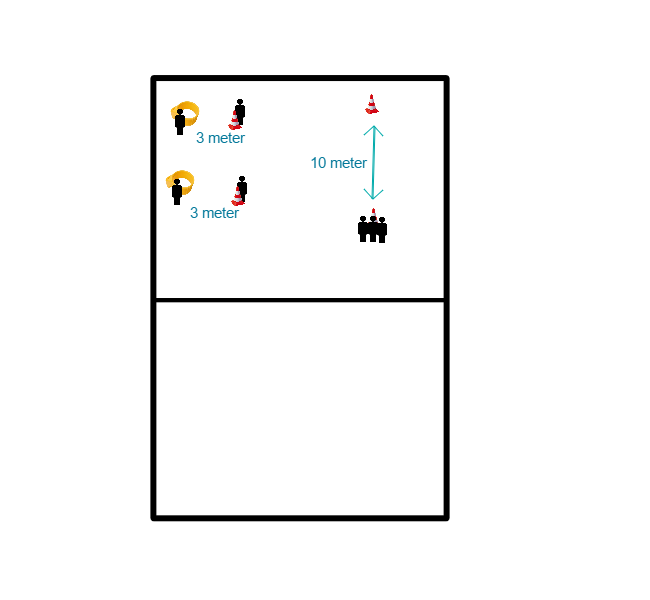 You put up three poles in a triangle, in the middle of the three poles you put a pawn. Three children are placed as attackers and the other children stand near the pawns.
First, you can choose that the attackers have to run through the poles. It doesn't matter which pole they hit, they can hit the same pole twice in a row. You can choose for this, so they have to run a lot. Also the children have to score 2 times, the person who scores first can trade with a declarator, the other children can trade with a declarator.
After that you can choose to letthe children do free balls, penalty throws, foul balls etc. 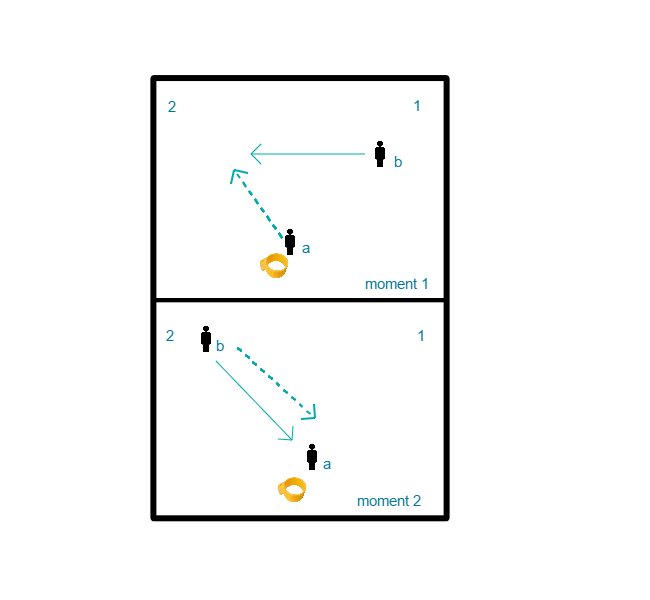 Passing balls from the circle around...

Pairs, running around the circle of pawns.

When you hear a 'YES' you try to pass the ball as fast as possible. Then the other runs around the circle. At a series of 4, the pair has a point.

In short:
start and sprint game.

Organisation:
Pairs on either side of a line in the middle of the hall. The numbers 1, standing slightly left of the line, are the rats and the numbers 2, standing half a metre right of the line, are the ravens. Between the rats and the ravens there is a space of 1 meter. The trainer now calls continuously 'rats' or 'ravens' in random order. When 'rats' is called, the rats run as fast as possible to their side of the room. The ravens must then try to tap the rats.Â

* Who has their personal opponent tapped the most times?

To keep it exciting, roll the 'r' for a good long time or make it a short story.

Nr.1 has the ball and after the start signal passes to Nr.2, etc. The distance between the players is 2 m. The last player runs forward after receiving the ball, taps the wall (or other point). Places on nr.1 and goes in front of the line. 1 places again on 2, etc.Â

This continues until the whole row has moved forward and no. 1 is in front again.

Make 5 rows of hats, each row has its own colour.

Have the players jog between the hats. After about 10 seconds call out a color and the players must sprint to the hats with the correct color. The last player to reach the hat gets a penalty point. At 5 penalty points the player has to do 5 push-ups and then starts again at 0 penalty points.