Organisation: one ball per pair or trio.

b ) As a., but now number 1 throws the ball away with a small curve, in such a way that it bounces on the ball at a distance of about 4 metres (and then makes a bounce of about half a metre high). Number 2 must try to get the ball as soon as possible after the bounce.

c ) As b., but now number 1 drops the ball from a height of 1.5 metres just in front of number 2. He/she has to try again to get the ball as soon as possible after the bounce. It will appear that almost everyone lets the ball rise a little and then catches it. Wrong (in the meantime an opponent can quickly put his/her hand on the ball). At the very moment that the ball is about to come up, the hand should be placed on the ball Take the ball!

Exercise
The first in line runs to the hoop and goes through the hoop from the bottom, so the hoop goes over their heads. Then he runs through the defence posture to pawn two and circles this in 4 circles. Finally, he runs to pawn 3 and scores before he can run back to pawn 1 and tap the next one in line. 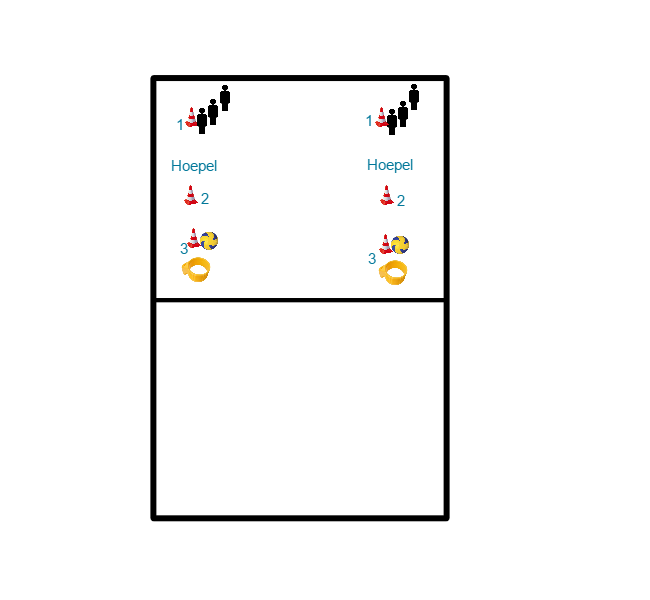 Organisation: One ball per pair or trio.

Let's get used to the field.

Three poles in a triangle. Three running players. From the pillon you push. Remember technique.

The children form a long snake and start to run after each other. Meanwhile the trainer changes the exercises by calling out: hop, lift the knee and so on. After all exercises the person in the back gets the assignment to catch up with the whole group by sprinting. When she arrives at the front she is the first one and runs on in a steady pace.

! Extra exercise: To add a fun game element, put one person in front of the snake. This person has to try to touch the tail of the snake by making an action. The snake must keep moving and try to make a block, so that the tail will not be touched.

Per 2 teams both score a goal. When both score, move to the left to the next basket, regardless if the team next to you has already finished. Who is first back to his own basket and scores again.

Each team has its own section.
The other team tries to conquer the box of the other.
This happens when one attacker stands in the box of the other and gets the ball from a teammate.
They get 1 point. No other players are allowed to stand in the box.
When the defence intercepts the ball, they may immediately open the attack on the compartment of the opposite team.

- from both teams 1 player allowed in the box

- no limit on number of defenders in section

- no limit on number of attackers in section