Soccer drills for all skills

Attack construction through the... 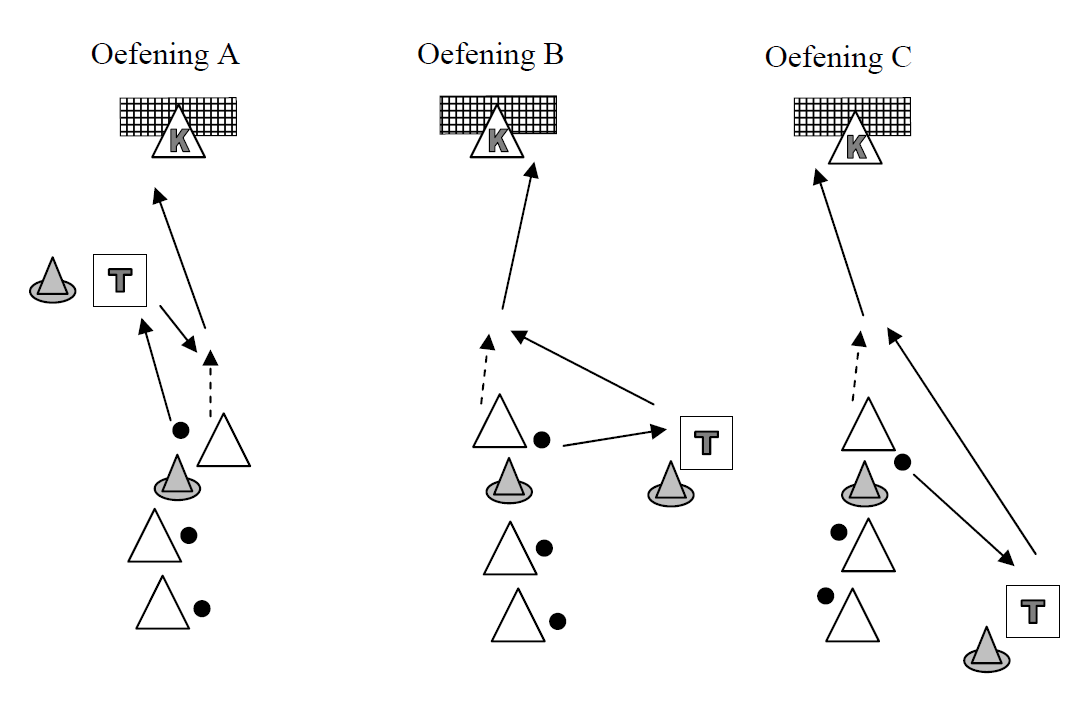 Divide the team into 2 groups. Everyone has a ball. Each group near a goal with a goalkeeper.
There are different ways to finish on the goal.
Exercise A is with a handball.
In exercise B the ball is played to them from the side.
In exercise C the ball comes from behind.
If everything goes well, you can also try other variations.
For example: throwing up the ball; throwing the ball over a player who has his back to the goal.

With F-pupils it is recommended to play handball yourself. This is to keep the pace of the exercise
.
In the second year of E-pupils, you can also let them pass.

Look at their standing leg at the moment of
shooting.
Do they estimate the ball speed correctly?

Field displacement with build-up via... 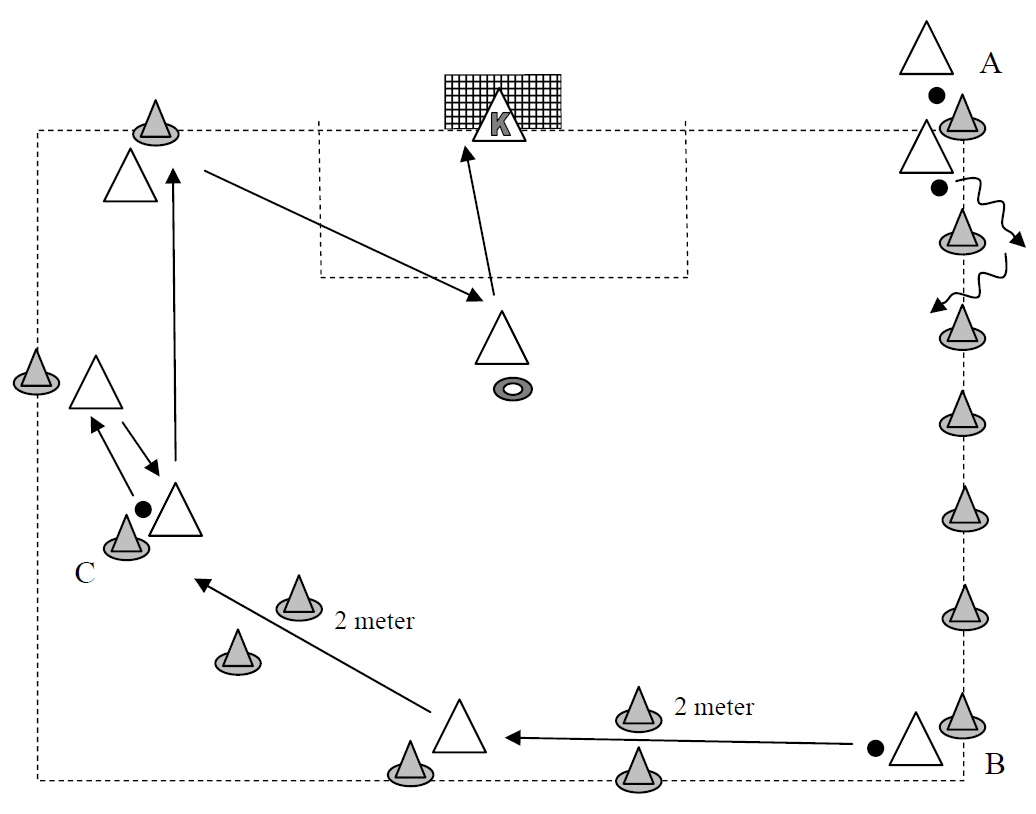 Start with dribbling, then shoot through gates, via a handball comes a cross which is
shotat goal
.
Depending on the number of players you can
startwith 2 balls, on position A and C, or with 3 balls at the same time
.
Everyone shifts one position at a time.

If necessary, accept the ball first.
Dribble with both legs.
Not too hard or soft passes.

Attack via the flank with finishing... 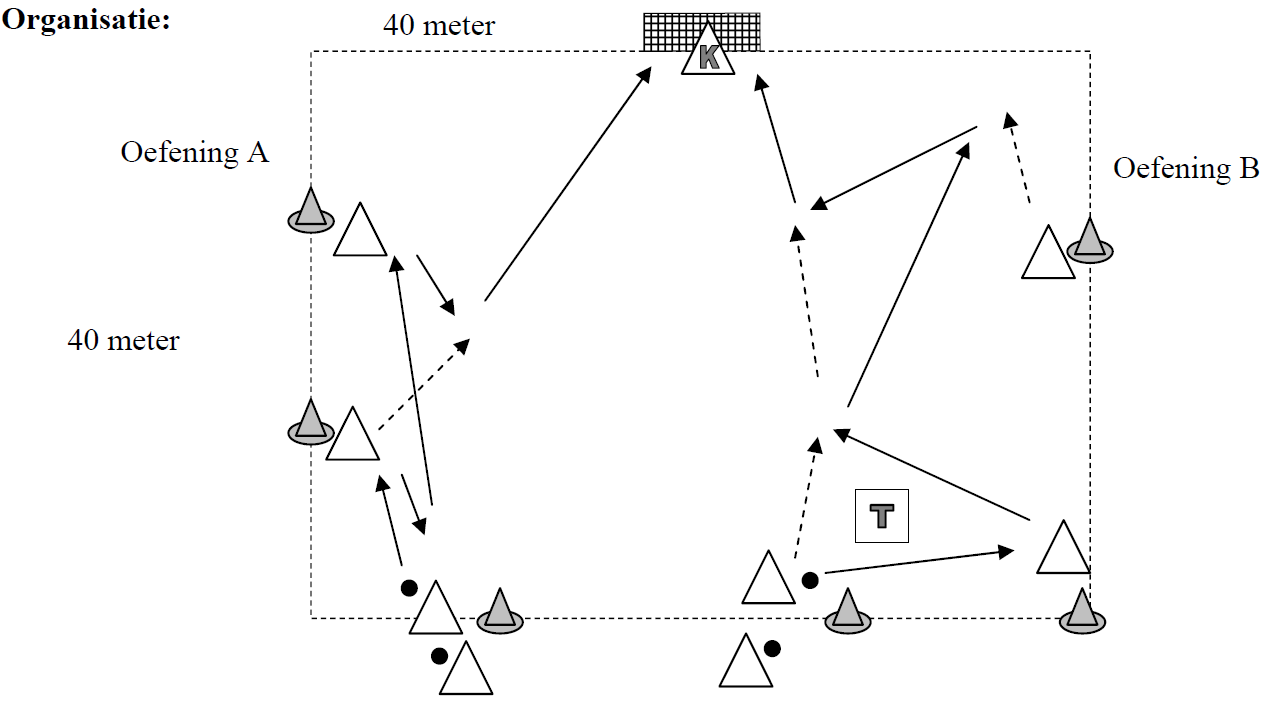 One on One and finishing on target

Divide the team into 3 groups. If you have few players you can also make 2 groups and
leave outa goalie
.

They have to pass the passive defender with a feint and then score.
After this, they move on to the next goal.

After a few rounds, you can indicate that you want to see a particular feint

If you are training in pairs, you can also be a defender yourself Now you can decide for each player how
strongly you will defend

If things are going well, you can instruct the defenders to defend at their very
best

You can use nice feints from professional footballers or the players of Balk 1 as an example
.

1 against 1 back half field 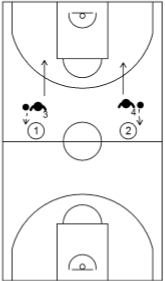 Requirements: Â- players must be able to dribble a layup run

Organisation
: Player 1 receives the ball from
33 moves backwards1
unbalances 3, passes and goes hard to the basket Mandate
for the defender is to stop the dribble loser
stays on the same side defender winner
attacks on the oppositeside

Teaching Points
:Attacker should aggressively close the distance Right
at the defender Dribble down the defender
Unbalance the defender Attacker
should be unpredictable
Choosing which side to pass on at the last moment
After
passing, move at full speed towards the basket Play
with guts If
you can't, regain your balance, and try another technique, e.g. backup dribble + jump shot

This is a test (modified version)

This is a test, to see if it works (custom version)

This exercise will improve the passing game. We also increase the difficulty by starting the same exercise at two sides. The passing has already been done for the U23 and U12 but can also be used for younger players.

It is a simple form which can be done in a space of 20m by 20m or smaller. If you want the pass line 3 to be longer and tighter, you have to draw it backwards.

A and D start the exercise together by passing to B and E (1), who then pass the ball back (2). A and D run in on the ball and play diagonally to C and F (3). Here, both players have to be careful not to bump into each other, so vista is important in passing. B and E turn around and ask a 1/2 from C and F (4,5). C and F guide the ball further to the starting position to start again (6). The players continue to advance according to the letter.
A-B-C-D-E-F-A.

You can always run this pass at a high tempo. If you have a younger age group which is a bit sluggish, then allow a ball control in the passing.

The fun aspect is always possible too. You place a small goal in the zone of A and D.C and F try to score a goal after the double pass. The one who scores the fastest is the winner.

Game shape 6 against 6 with endzone

This time we have put online a game form in which you play 4vs4 in the middle and each team has 2 more players in a neutral zone on the sides. This type of game has been practiced many times by our teams and first teams. With emphasis on fast passing and deep running.

This type of game can be played on a 15m x 30m pitch. This depends on the age of the players and the pressure they are under. If you want to play in this shorter space, make it smaller. Otherwise, make it bigger. The endzone is about 2 to 3 m deep.

In the middle you play 4vs4 and on both sides both teams have 2 players who have to play in 1 time.

The 4 middle players try to control the ball in the endzone, but the last pass must be made in 1 time.

As you can see on the picture, the ball is played in by the back player to the outfield player (1), who immediately passes (2). The middle player passes to the furthest player (3), and the furthest player looks for the 3rd man in between, who opens up in the deep (4). The latter then checks the endzone to score.
Like in the picture, you can also place fixed cones or dolls as an extra difficulty.

Of course you can increase the number of ball keys according to the age.
There are always extra rules that you can add. E.g. it should not be the 3rd man to score.
This type of game can be used perfectly in your periodization.

Finishing after a cross

The goalkeepers must be concentrated and ready for the crosses, and have a good starting position.
The goalkeepers are allowed to take the ball at all times
Players who finish on goal run straight at the ball, and not around it.
A rebound may also be completedCoach
the players to time their runs well.