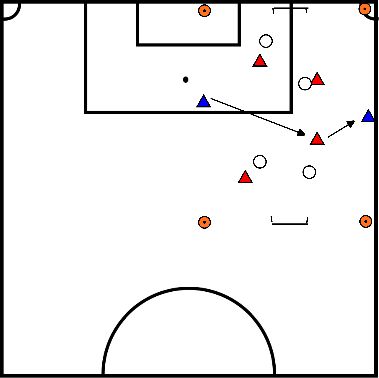 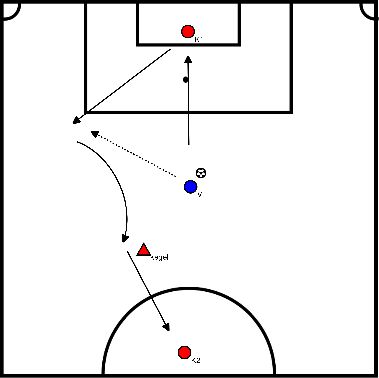 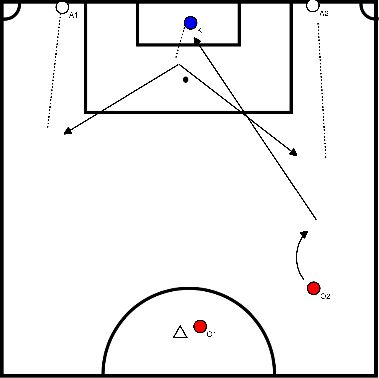 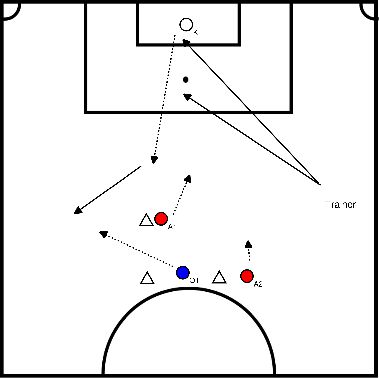 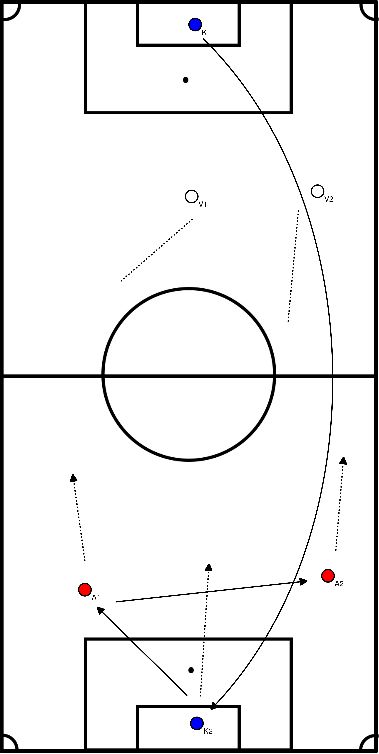 This exercise will improve the passing game. We also increase the difficulty by starting the same exercise at two sides. The passing has already been done for the U23 and U12 but can also be used for younger players.

It is a simple form which can be done in a space of 20m by 20m or smaller. If you want the pass line 3 to be longer and tighter, you have to draw it backwards.

A and D start the exercise together by passing to B and E (1), who then pass the ball back (2). A and D run in on the ball and play diagonally to C and F (3). Here, both players have to be careful not to bump into each other, so vista is important in passing. B and E turn around and ask a 1/2 from C and F (4,5). C and F guide the ball further to the starting position to start again (6). The players continue to advance according to the letter.
A-B-C-D-E-F-A.

You can always run this pass at a high tempo. If you have a younger age group which is a bit sluggish, then allow a ball control in the passing.

The fun aspect is always possible too. You place a small goal in the zone of A and D.C and F try to score a goal after the double pass. The one who scores the fastest is the winner.

Game shape 6 against 6 with endzone

This time we have put online a game form in which you play 4vs4 in the middle and each team has 2 more players in a neutral zone on the sides. This type of game has been practiced many times by our teams and first teams. With emphasis on fast passing and deep running.

This type of game can be played on a 15m x 30m pitch. This depends on the age of the players and the pressure they are under. If you want to play in this shorter space, make it smaller. Otherwise, make it bigger. The endzone is about 2 to 3 m deep.

In the middle you play 4vs4 and on both sides both teams have 2 players who have to play in 1 time.

The 4 middle players try to control the ball in the endzone, but the last pass must be made in 1 time.

As you can see on the picture, the ball is played in by the back player to the outfield player (1), who immediately passes (2). The middle player passes to the furthest player (3), and the furthest player looks for the 3rd man in between, who opens up in the deep (4). The latter then checks the endzone to score.
Like in the picture, you can also place fixed cones or dolls as an extra difficulty.

Of course you can increase the number of ball keys according to the age.
There are always extra rules that you can add. E.g. it should not be the 3rd man to score.
This type of game can be used perfectly in your periodization.

This is a technical football exercise in a pass and kick form.

Place three or four players at all yellow cones. If you have sixteen players or more, it is best to mark out two sections. The exercise starts with four players at the same time. All four players dribble to the blue pawn in the middle of the square. When they reach the blue pawn, they cut the ball off to the left or right.

The first player of pawn A passes to the second player of pawn B. He receives the ball and now it's his turn to dribble to the blue pawn and pass to the left or right.

Player A runs after the ball and thus joins the line at the pawn again, keeping the players in a circle. Make sure all players run in the same direction (left or right). After a while, you can switch between left and right.

The ball touches must be good, make sure the players move on their front feet and have an active position to catch the ball

Make sure that the cutting movement is exaggerated and that the ball is in a good position to be passed into.

The ball should be played in hard again and again, in order to keep up the pace and speed of the ball

The dribbling must also be done at a high speed, with the ball close to the foot.

Variants of this type of exercise: (can be performed with the left or right foot)

Cutting with the inside and outside of the foot

Make sure there are enough balls at pawns A and B.

You can do this exercise with six to eight players.

If you have enough players, you can make two squares.

Player A and B have passed to Pawns E and F after the pass and are now defenders. The players at Pawns E and F turn away from players A and B who are now at their backs.

The ball speed must remain high, so the balls must be hit hard. This is best done over the ground at a short distance (15 to 20 metres) and through the air at a long distance (35 to 40 metres) At a distance of about 8 meters it is best to bounce the ball.

Make sure the players of pawns C, D, E and F have an active attitude and stand on their front feet. They really have to want the ball and must also make a front pass.

Make sure that, after turning in, the players turn open and place their bodies between the defenders and the ball They should also keep the ball close to them When they have opened up, a slight acceleration takes place