Trainer throws ball to defender, there are 3 rows of attackers at position 2, 3 and 4 ready. SV chooses a striker. Attackers pay attention to their run-up and arms. 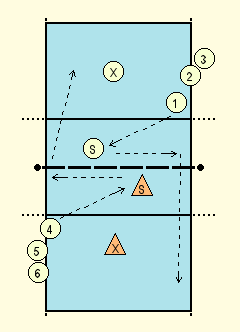 The purpose of the exercise is twofold: the defender must learn to 'read' where the attacker is going to hit and the attacker must look where the defence is before hitting.

We work with two regular playmakers, on both sides of the field a row of attackers on the left-for position. And two defenders, who may choose where they position themselves on the field. A defender has to defend the attack 10 times, preferably a nice pass, but touching is enough. If the attacker hits the net or leaves the field, that also counts. And the attackers may only smash, no prick balls! After the attack, the attacker retrieves the ball and joins the other row. The attacker who defends the ball at the 10th time takes the place of the defender. The defender will then of course attack.

If there are less players, the exercise can also be done, but then on one side. The attacker retrieves the ball and joins the same line.

The blocker joins in, indicates where he is going to block and the mid-back goes to his place. Tag as preparation for training with...

One scapegoat is appointed, this scapegoat must try to catch the other players within the yellow lines.

Diving from line to line

Two teams in the length of the field.
Pass the ball at the net 10 times at 6 mtr and the player at 6 mtr passes the ball back.
Coach each other when things are not going well and indicate whether the ball is good or not.

Sprawl trainingExplain the
sprawl. (gliding low over your forearm to catch the ball)

Start on your knees and make yourself long while sliding over your forearms.
If that goes well, let the group stand and do the same exercise while sitting low. This can still be a barrier for some players to continue You have to coach these players to get this technique right.
In the end they all go.

Then in groups of three hit the ball to practice.

If this goes well you let the player on the 3mtr line start doing a split step backwards and do the sprawl forwards.

Note it is wise to have socks or long sleeves on with this exercise. 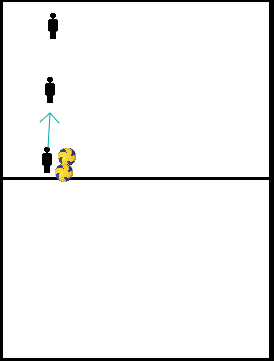