All stand in one big circle.

After 5 commands 30 seconds of alternating straight, left and right.

A varied warm-up where 6 benches standing next to each other with each +/-2-3m between them form the basis. See videos for exercises. It is a varied selection of exercises: running, running, jumping and strength exercises with and without a ball. Depending on the target group, you can choose the exercises.

3. 2 players remain simultaneously. Grab bench with two hands. Do legs over the bench three times. Then move to next bench and so on.

4. Same as 3, but they cross each other. Every bench one changes from left to right.

5. You jump as 3, once over the bench. Sit with your back against the bench. Grasp the bench with your arms. Legs stretched. Do 1 push up.

6. Same as 5, but you cross each other. Each bench is alternated between left and right.

Grasp the bench with your hands and your body stretched out. You make 1 push up. And jumps once over the bench.

8. Same as 7, but you cross each other. Each bank switches from left to right.

9. Combination of 6 and 8. Start at the first bench with a push forward, the next bench backward and so on until the last bench. In between they cross.

10. One jumps leg by leg over the benches in a running pace.

11. Same as 10, but they cross each other. Each bench is crossed from left to right.

12. One jumps on the bench. Then from 1 jump spread legs around the bench. You look at each other. Bench up-down-up and through.

13. Same as 12, but they cross each other. Every bench one changes from left to right.

Foursomes. In fact the same as 14, only now the bench is grabbed by 2 players on both sides. Then 2 players go under it and hold up the next bench, etc.

Group together, 1 row at the right-hand side of the pawns. 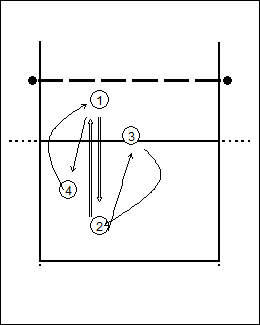 Fitness with speed ladder and...

Warm up without the ball