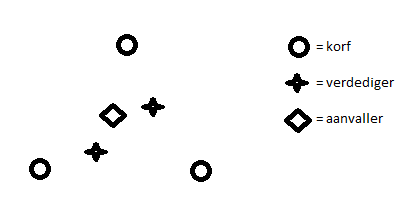 Shoot and capture yourself

In teams of four, two attackers and two defenders.

Organisation: Each team of five or four players has a ball and an area of about 20 by 20 metres. The players are numbered.

a ) Number 1 is attacking, number 2 is defending and numbers 3, 4 and 5 are playing together with the attacking player. Everybody can move freely through the area. The attacker always gets the ball back from numbers 3, 4 and 5. The defender's task is to intercept the ball. Can the attacker manage not to lose the ball a single time? The ball may not fall on the ground either! After about 30 seconds the players change tasks: number 3 attacks, number 4 defends, etc. until everyone has been attacker and defender once.

If necessary, extend the task next time:

b ) As a., but give the instruction that the attacker always has to turn away from her defender: that way she can both pass and receive the ball back easily. I call this: 'cutting and turning', others call it 'keeping your opponent on your back'.