soccer drills for
all skills 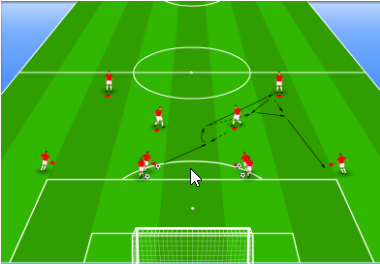 Exercise 4 RUNNING AROUND A PARTNER

Exercise 6 RUN ACCELERATING AND SLOWING DOWN

For this fun and interactive soccer warm up you let the players make a circle around you, about 15 meters away from you. So you are standing in the middle of the circle.

Trying to win the ball back as fast... 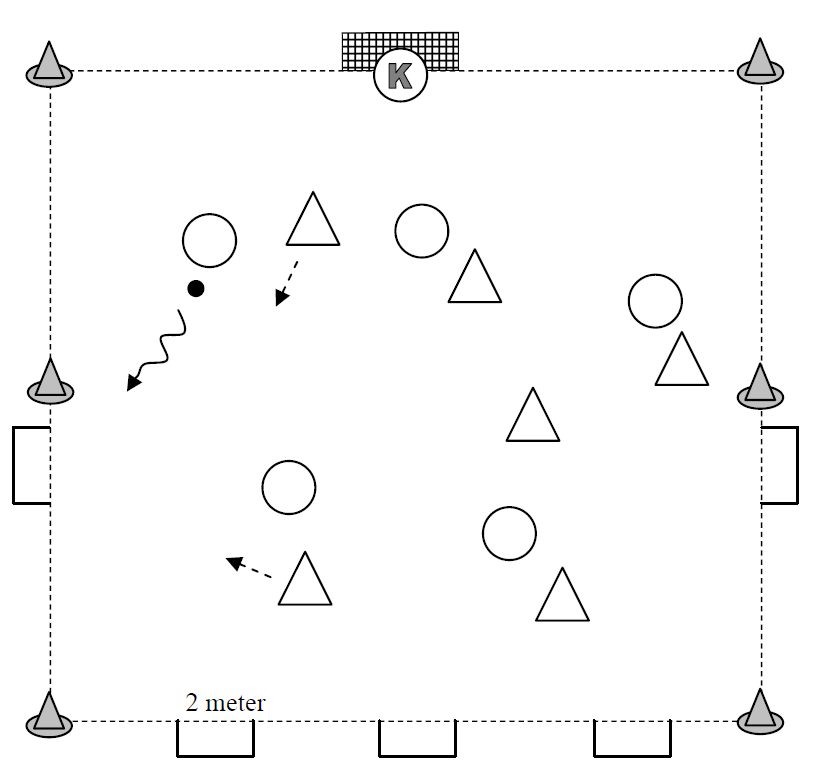 There will be 6 against 5 + goalkeeper.

If the party that has to score on the big goal has lost the ball, they have to defend 5 goals.

After 15 minutes of changing halves.

If the attackers of the triangle game lose the ball, it can very quickly result in a counter-goal.

Especially the players who don't play in the league games can't like this kind of game.

Cover the man in time.

Do not go in recklessly.

Cover on the good side.

Posture during the duels, through the knees.

Losing ball possession and taking in... 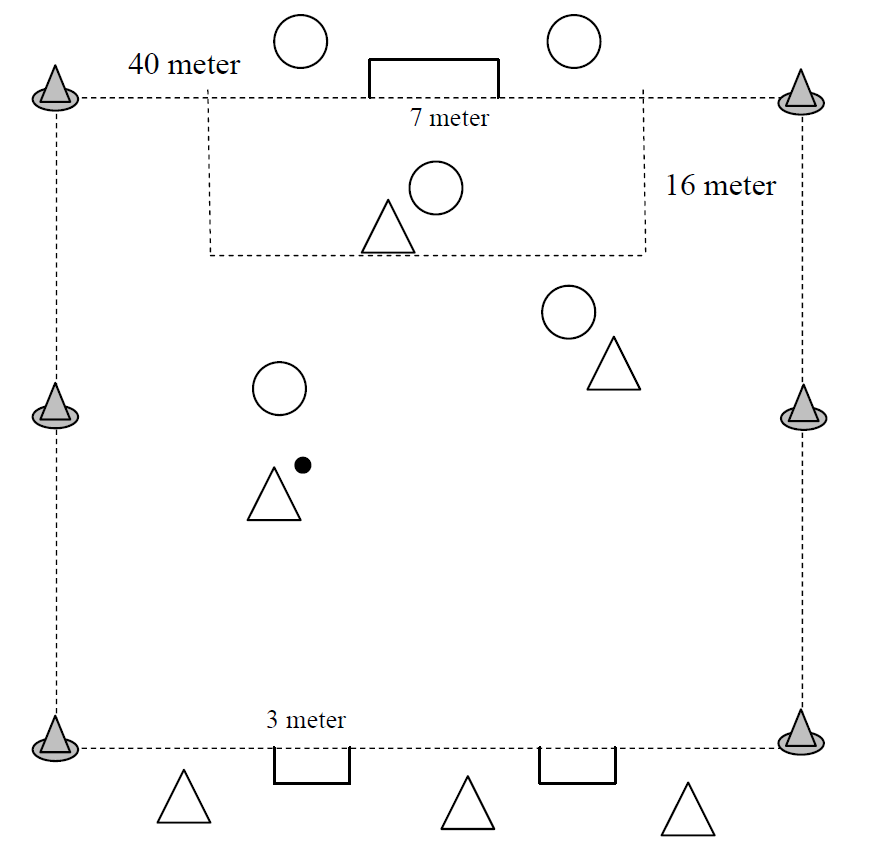 There is 3:3 played. Without goalkeepers.

On the goal of 7 meters may only be scored from the 16 meters area.

The other party can score on the 2 goals, from any position.

If the ball goes out at the sides, it is restarted with a kick.

After a goal or if the ball passes the backline, the game is restarted on the back line of the offensive team (triangles).

There will also be 2 new defenders and 3 new attackers in the field.

Fierce defending before they are in the 16 meter area.

Make the field small when defending.

Defending the player or going in for... 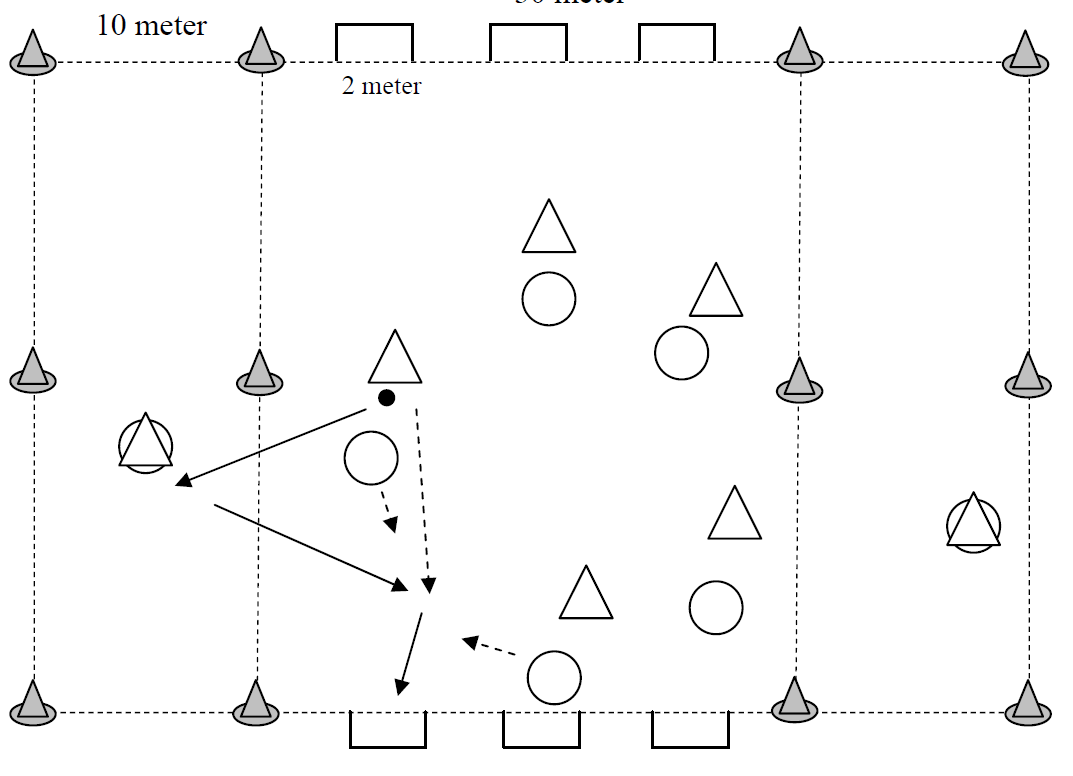 There will be 5:5 or 4:4 with extra players on the sides, the wingers. These 2 players are with the ball owning team.

The wing players may dribble with the ball first.

After a few minutes they have to play immediately.

The players on the sides are not allowed to score.

After 10 minutes or a little less the offside players change.

Players sometimes find it better to keep their own man, than to prevent a goal by stepping in or covering an opponent standing closer to the goal. Let them do it wrong a few times first. Use these situations later to give them directions.

Do they know how their fellow players stand when they have to defend?

Stand between the opponent and the goals.

Have them positioned so that they can see the opponent and the ball. 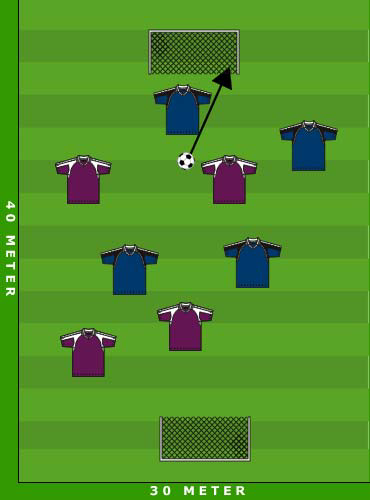 This can be in 4 against 4 or 3 against 3 setup. Both teams play with a small ball and have to overpass given the size of the field. Because of the small field and the small ball, they are forced to take the ball well and pass cleanly. 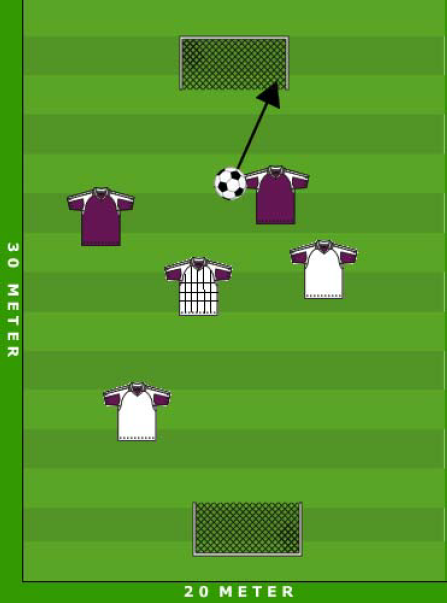 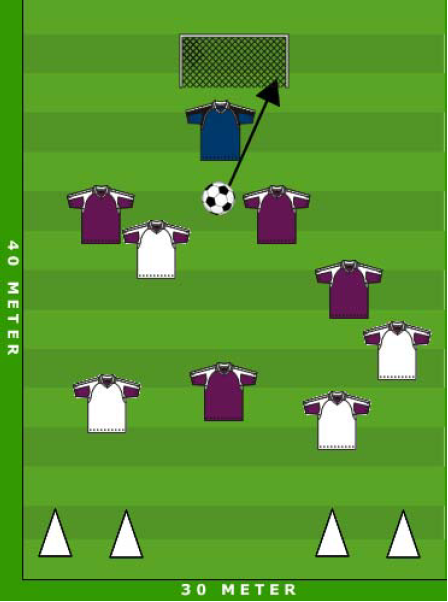 1 large goal and 2 small pylon goals along each line and 1 ball. 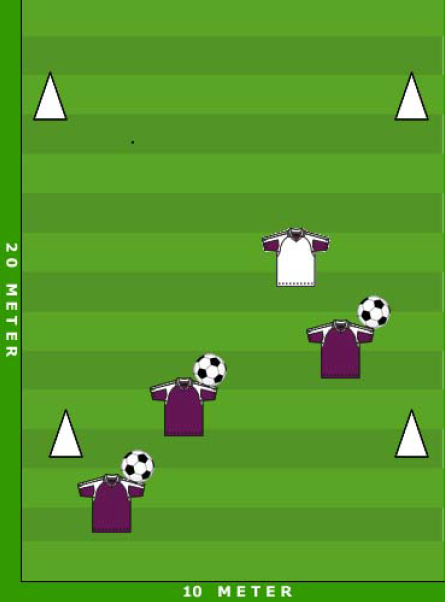 Players must come from one side of the field with a ball on the other side. In the middle is the ball collector. This player should try to take the ball from the running players.

Rules of the game: