Goal of the exercise is A is going to coach B which way to turn open. 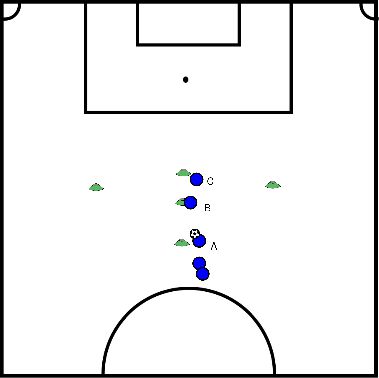 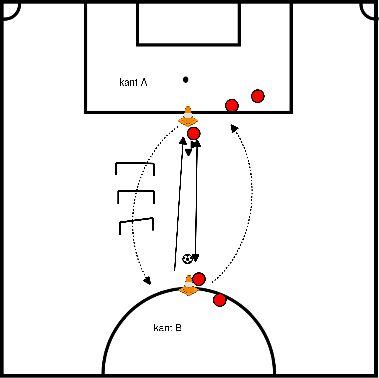 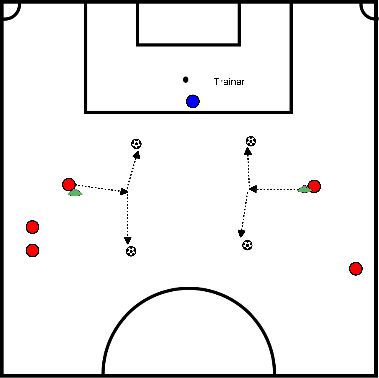 Because field is not super long, you are going to create many moments when players can run offside.
Ask the players why it was offside and how they could have prevented it.

During this first phase of training, players are taught to choose position well while defending.
Players are encouraged to first choose a good position in relation to the attacking pair and to experience how to reduce the opponent's play.
Because of the one-against-two situation, the defender will have to shield the passing line well to the opponent without the ball, and then force the opponent with the ball to the side. Next, it is important that the opponent is forced to run diagonally forwards - in the direction of the sideline - and cannot turn.
The defender then waits for the right moment to intercept.

Coaching:
The defensive player shields the passing line to the opponent without the ball.
Goalkeeper checks off the goal and coaches fellow players.
Defender tries to force the ball-carrying opponent one way and at the right moment (at the side of the field) intercept the ball. 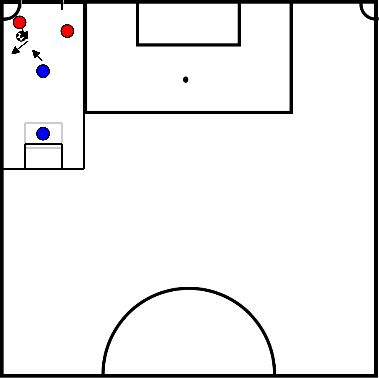 During this second form of practice players are taught to choose their position well while defending.
Players are stimulated to be well organized and to screen the center -the space in front of the goal- in order to force the opponent into one direction. This requires good mutual cooperation, which can sometimes feel unnatural for players because they have an urge for the ball. In this simplified underdog form of soccer, players can experience what happens when they give away too much space and do not cooperate well: the opponent will then be able to score easily.
It is important for the defender who presses for the ball not to give the opponent space to turn, and to force even more to the sideline. The other defender can learn to cover his/her back well.
To execute this exercise properly where the defending team can intercept the ball, the building up opponent is given a lot of space to build up. Only when one opponent dribbles with the ball towards the goal will one of the defenders step in and apply some pressure. Only when the opponent in possession of the ball explicitly looks for the 1v1 situation, one of the defensive players will try to intercept. Until then, they patiently screen the goal, waiting for the opponent to make a mistake . 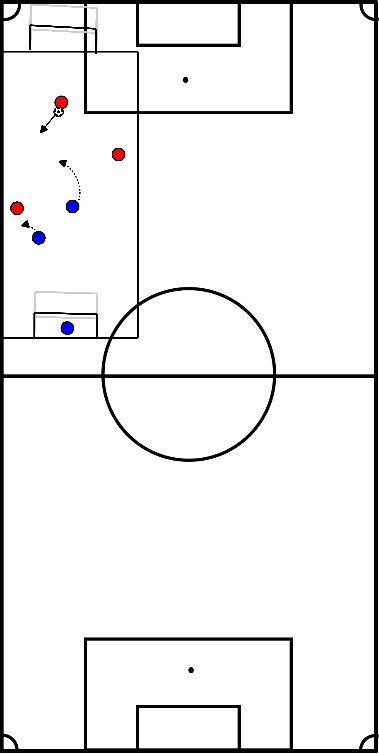 During this drill, players learn to remain patient and screen the goal properly, among other things, to resist resistance. An added difficulty is that there are two goals to be defended, making it extra important that the center is properly shielded. The most logical way is for the defending team to force the opponent to the side and for one side of the field to try to intercept the ball when the opponent tries to get closer to one of the two goals to create a scoring opportunity. This practice form is again more difficult than the first form due to the number of players, but remains manageable. It allows them to learn to cooperate and to maintain a proper distance between them. 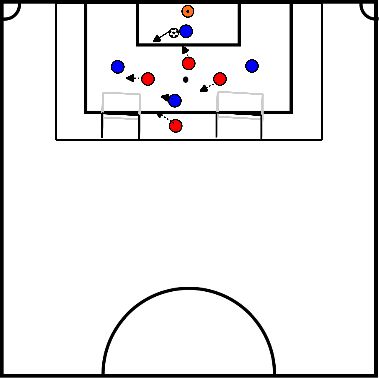 This type of exercise is a positional game in which the team with the excess number must press for the ball immediately after losing it.

The principle of play
What are your players supposed to do when the ball is lost somewhere on the field? If you want your team to put direct pressure on the ball in the transition from possession to loss of the ball, the following form of practice is very suitable to work on this. The playing principle that is central in this form of practice is 'putting pressure on the ball directly'. With 'putting pressure' I mean attacking the ball; actively moving towards the ball -and opponent- in an attempt to conquer it as soon as possible.

Coaching
What can you pay attention to in this exercise? Since pressure on the ball is central, it is logical to look mainly at this:

Naturally, the form can also be played with other numbers, as long as there is an over- and undercount.

Direct pressure is very effective when it works. If it is not successful and the opponent can play under pressure, it is very likely that large spaces will be created, which is a risk. Correct adjustment of the pressure requires training. 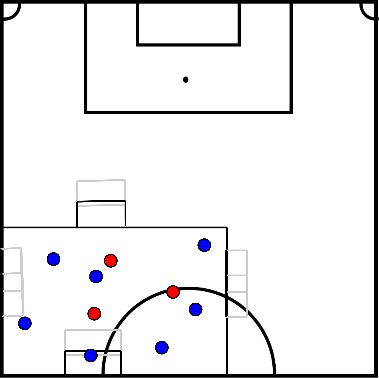