Trainer (mid) and player on 4 at the net

Defence has to solve it by sliding in well and/or standing short behind the block. SV stands behind and comes forward and gives set up to middle, left front or diagonal, who finishes the attack. Catcher puts ball back in basket.

Goal: - Defense on the right position. Who goes for which ball?

- Being able to quickly switch from defense to offense. Possible 1st tempo exercise in the middle of the attack.

Defending the ball and building the...

Accent is set up, block on outside and play smart.

If big team does a good attack then they get a point. If the ball falls on the ground or doesn't come over the net the other two players get two points. When BH is over the net each player gets 1 point. Coach throws the ball over the net 6 times (so you can get 12 points). After that change positions.

Coach plays high ball in the back. 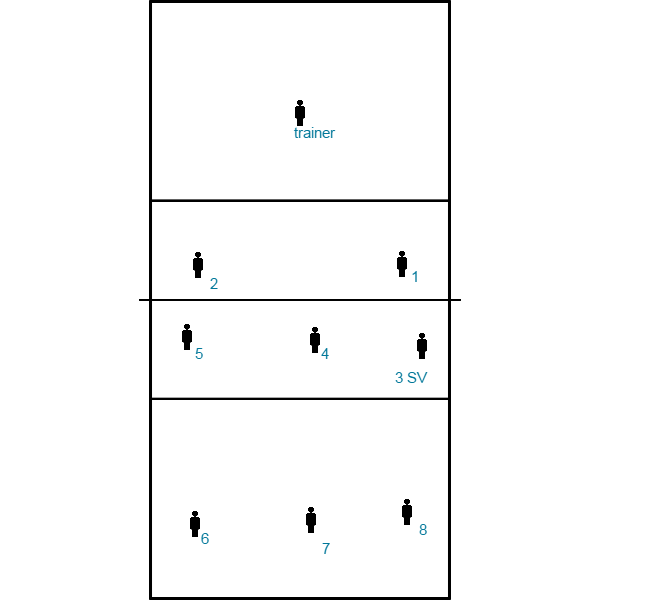 Attack: only from position 2

Defending behind (from the smart ball from 1)

1 blocks turns around gets a hit ball from position 4.

In this exercise, positions 4 and 7 are not occupied. On the right is sv.

Accent in this exercise:

- Try to play through and vary attacking balls: smash, hole in the middle or play on the lines left and right (in the back is difficult because there is no miss-back who can defend the ball.

Trainer plays high ball at the back

Set up to the other

You divide your players into 2 teams.

One of the pair is standing at the net to make a block.

The player standing on the three-meter line throws the ball just over the net.

Each player remains standing for 10 blocks. The rest attack. For every ball you hit you get 1 point. It doesn't matter if you block the ball or not, but it has to be hit.

If it goes well: pay attention to the direction of your hands, block on the net (so no letter box in between).

Position 4 does not participate

First with attack and after a number of balls switch positions (front / back).

You can also vary by giving different orders to attackers (where to attack and where to play the ball).

Trainer plays high ball in the back.

Set up to the other

Attack after a 2 block 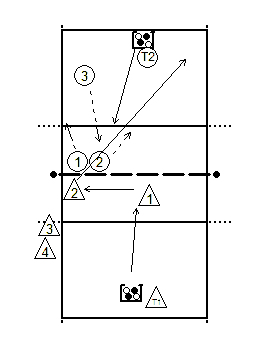